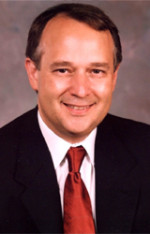 Edward M. Lambert, Jr. is the former mayor of Fall River, Massachusetts, serving 12 years in that position from 1996 to 2007. During that time, he was selected by his peers to serve two terms as President of the Massachusetts' Mayors' Association. He has over 30 years of governmental experience at the state and local levels, working on urban redevelopment, economic development, increasing community educational attainment, improving and building schools, providing effective municipal services, and a range of public policy issues. Mr. Lambert also was elected to 4 terms in the Massachusetts House of Representatives, where he served on the Education Committee and participated in writing the 1993 Education Reform Act, and he served more than 20 years on the Fall River School Committee. He also has worked as a social worker and administrator for a residential program for at-risk youth. He possesses a B.A. in Psychology and a M.Ed. in Counseling. He has served as a consultant for municipalities and private sector clients. Mr. Lambert currently serves as Director of the Urban Initiative at the University of Massachusetts at Dartmouth, where he also teaches public policy and public management. The Urban Initiative conducts research, technical assistance, and policy analysis to benefit municipalities, the state, and the region. In 2008, the Urban Initiative was selected to serve as the first national satellite of the National Dropout Prevention Center. Ed Lambert is the author of the soon-to-be published NDPC monograph, Beyond the Bully Pulpit: The Mayor's Role in Dropout Prevention.

Dropout prevention is everyone’s responsibility. This webcast will focus on how communities can mobilize around a comprehensive dropout prevention planning process and how citizens and school leaders can engage their mayors and elected officials in the effort. We will also specifically analyze the value that an engaged mayor can add to the process, including taking the lead in creating a unified community value in support of higher educational attainment and increased graduation rates.

Dropout Prevention in the South Coast

Mayoral Leadership and Involvment in Education: Action Guide for Success