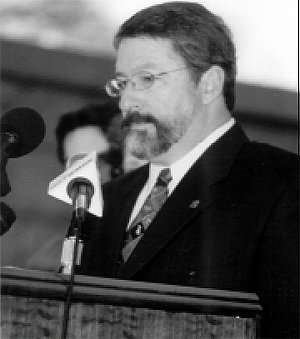 The second annual Award was presented to William R. Byars, Jr., Director of the South Carolina Department of Juvenile Justice (DJJ), at a ceremony held on February 24, 2004.

He received the Champion for Children Award from the Alliance for South Carolina’s Children in 1998, and awards from the U.S. Department of Health and Human Services Commissioner for “Outstanding Leadership and Service in the Prevention of Child Abuse and Neglect” in 1996 and 1998. In 1998, Judge Byars received a Child Advocacy National Certificate of Recognition from the ABA’s Young Lawyers Division for “significant legal contributions advancing the welfare of our nation’s children.” In 1999 Judge Byars received South Carolina’s highest civilian award, The Order of the Palmetto, from the Governor for “leadership in juvenile justice and children’s law reform,” as well as awards from Prevent Child Abuse South Carolina The American Professional Society on the Abuse of Children. In 2000 he was recognized by South Carolina Families for Kids for “Outstanding leadership in improving services to children in South Carolina,” and received a special award from the American Academy of Adoption Attorneys for “Extraordinary Commitment to the Welfare of Children.” The South Carolina Council on Adoptable Children presented the Judge a Lifetime Achievement Award in April 2002.

He and his wife, Camille, have been happily married for 36 years. They live in the country in Kershaw County. They have three sons and two grandchildren.